The best youth cyclists in Scotland descended on Ellon town centre on Sunday to take part in the latest round of the Scottish Power National Youth Series. The event served as the warm up to the Ythan Pedal Car race based around the same town centre circuit that would be used for the ever growing fixture in the Ellon calendar.

First in action were the U8 riders and as forecast Ythan's Elliot Rowe led from the start and was untouchable as he cruised round the circuit to win comfortably. Rowe was followed teammates Callum Cairney and Sam Horrell who finished second and third respectively. Ythan's Fiona Cairney finished first girl ahead of Ailsa Long and Anna Brown. 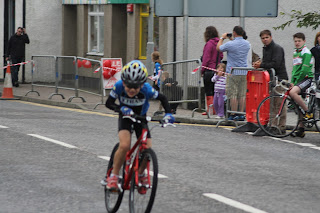 The U10 race saw a fantastic debut performance from Ythan's Fraser Gault who quickly established himself at the front of the race with Murray Lawson (Edinburgh RC) and the two riders built up a comfortable lead ahead of another Ythan rider Daniel Kain. Lawson was the more experienced rider and took shelter from Gault who maintained a strong pace throughout but his hard work was to be to the benefit of Lawson who rode away from the Ellon rider to claim first place. Gault secured second place with Kain in third. Imani Pereira James (Glasgow Riderz) secured first girl ahead of Skye Donnely (Glasgow riderz) and Katherine McLeod (Edinburgh RT)


With the sun now beating down onto the circuit and the early morning dampness having disappeared the scene was set for even faster racing as the older riders lined up for the U12 race. Ythan fielded Callum Cooper who put in a strong effort against experienced riders from the well established Discovery CC youth team from Dundee, Cooper placed fourth behind race winner Alfred George (Discovery CC), Alexander Dent (Nevis Cycles) and Jamie Penny (Discovery CC). Anna Flynn and Eva Barnet took first and second in the girls category. 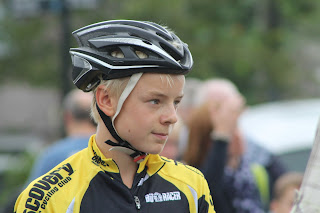 The penultimate race featured the U14 riders where Ythan's Lewis Goodlad was looking to progress from his efforts at the Cyclefest race at Alford in May and show that he could compete with riders such as Stephen Dent (Nevis Cycles). After a cautious opening the race finally sprung into life when Dent forced a gap between himself and the bunch and it was a lead he would hold to the finish. With two laps remaining Goodlad put in several strong efforts and closed the gaps between the fracturing bunch ensuring that he would enter the last lap with a chance of sprinting for second. As the bunch headed along the back of the course the speed increased with Sean Flynn gaining a gap that would secure second and as they took the final bend the speed increased even further before the remaining 6 man group unleashed a frantic sprint to the line. Alex McRae (Glasgow Riderz) took the bunch sprint with Goodlad finishing 8th. It was a performance that showed the strength that Goodlad is developing and his step up to the U16 level in 2014 promises much. Amber King rode strongly as the only girl in the field and deservedly secured first place in the girls category. 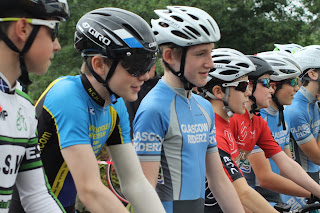 The final event was the U16 race featuring the best youth cyclists in the country and for the third year in a row Ythan had a rider who had the potential to challenge for a podium place. Jordan Stronach's results indicated that a big performance was coming and the tall athletic rider didn't disappoint. Joined in the final event by his teammate Hamish Cooper, Stronach maintained his position near the front of the bunch throughout the early stages where the pace was frenetic. Cooper, in his first year of racing had aimed to stay at the pace of the front runners as long as possible and he endured the high speed start before dropping back along with several other riders as the attrition of the top level of Scotish youth racing started to impact on the stamina of many. Attrition was the best word to describe the race as it unfolded as one by one the front group reduced and the strength of Stronach, Rian Hill (Classic Racing Team) and Andrew Brown (Falkirk Bicycle Club) finally forced a gap with 5 laps to go. The three riders drove on and at the bell lap it was clear that the day would end with a sprint finish in front of the growing crowds in the town centre and as the three riders began the downhill sprint it remained neck and neck. Hill and Brown hit the line first with Stronach 0.8 seconds behind in 3rd and only 0.6 separting Hill who took first place ahead of the Falkirk rider.

The girls U16 had settled into a three rider affair with Julie Kenneth (Sandy Wallace Cycles), Lauren Smith (Discovery CC) and Ella Connely (Forres CC) ignoring the faster boys and sharing the pace throughout the event and as a result another sprint finish was guaranteed with Kenneth beating Smith and Connely to the line. 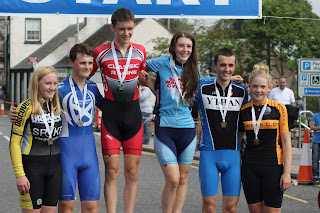 The race was a fitting climax for many of the young cyclists from Ellon and beyond who have trained hard at their Saturday morning sessions. For the coaches the highlight was simply seeing the enjoyment through all the age groups as well as a keen professional eye on the developing talent that they have in their charge. That youthful talent of Ythan QL also showed that they can go even faster on 4 wheels by securing the Pedal Car title later on in the day. 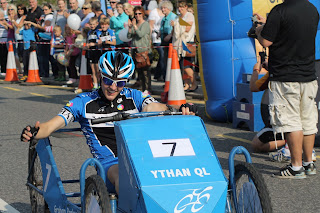 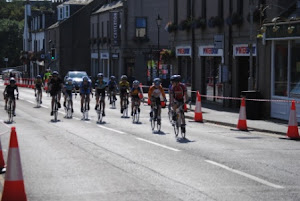